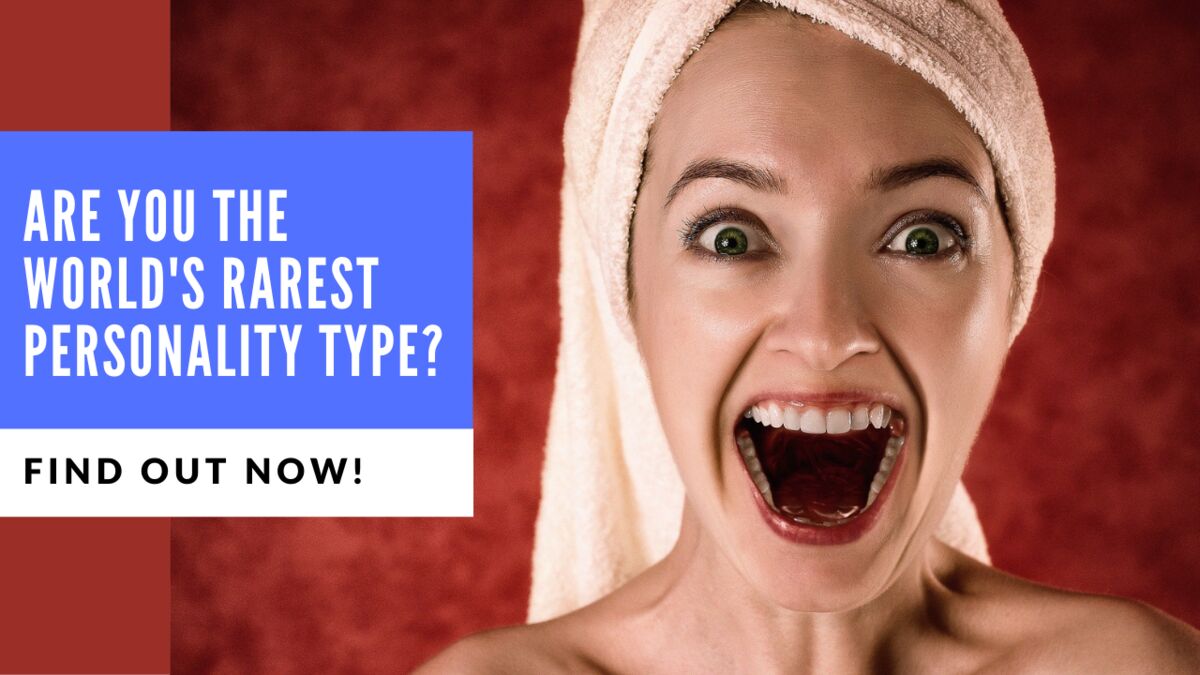 Are you an INFJ personality type? If you are then you one of the rarest people in the world! Let’s find out for you right now!

First, what the heck is an INFJ and why should you care? Well, it would be kind of nice to know how special you are right? Ask yourself questions as you read through this self enlightening post.

INFJ stands for Introverted, Intuitive, Feeling, and Judging. These traits are supposed to give an indication of your character, talents, and type of person you are among other things.

This all comes from Myers-Briggs Type Indicators. Myers-Briggs (two people) produced one of the best-known personality tests in the world back in the 1940’s based on the theories of someone named Carl Jung.

The test assigns a personality type based on four categories: introversion/extraversion, sensing/intuition, thinking/feeling, and judging/perceiving.

Of the 16 types presented on the test, INFJ is the rarest personality type.

Only an estimated 2% of the population falls into the category, making them incredibly unusual. What sets them apart from the others? Are you an INFJ???

One defining trait of INFJs is their tendency to be loners. They are true introverts who enjoy their own company. Does that sound like you? Many times, they report feeling like they never really fit into any group but at the same time don’t get lonely.

Some INFJs do say they are very good at faking it though and can function well in crowded settings. This somewhat dispels the idea that INFJ types find it difficult to have relationships with others.

INFJ’s find surface-level communication, such as small talk, tedious, and unnecessary. They would much rather skip the idle chit chat in favor of a deeper and more meaningful conversation.

Insightful discussions are well suited for an INFJ individual even though they may shy away from saying much. Just because an INFJ does not say much does not mean there isn’t a lot going on in their mind. Don’t underestimate them or pre-judge.

What subject matters do you regularly enjoy partaking in?

Most INFJs don’t have a large circle of casual friends or acquaintances. They gravitate to emotional intimacy with only a few that they consider high-quality people.

When they do choose to cultivate a friendship, they are actually a very good friend to have! Caring, generous, and surprisingly in-tune with others’ emotional needs are typical traits of an INFJ.

So if you are one of these personality types you most likely are not considered the most popular person around but instead someone that a small handful of people total trust and consider a dear friend. Someone they can turn to for help if really needed.

How many truly close friends do you have? Or do you mostly just “know” a lot of people?

INFJs are deep thinkers who spend a lot of time reflecting on the deeper mysteries of the universe. They spend their time in serious pursuits and looking for serious conversations about those interests.

This can result in them reading in great depth on a wide variety of topics such as religion, science, psychology, and self-help. They are very knowledgeable people who often are self-taught in a range of fields. Don’t try to beat them in Trivial Pursuit! Or are you the next Jeopardy champion in waiting?

There’s no such thing as settling for an INFJ type. They are authentic in everything they do, including relationships. They may be extremely loyal to those close to them but they will also not associate with someone if they see any sign they are untrustworthy.

INFJ’s are perfectionists. They strive to reach their goals at any cost, crossing their T’s and dotting those I’s without fail. They’ll always keep their word and stick by a task until it’s finished to their high standards.

Because of this many INFJ type people can have overly high expectations of themselves and even others they associate with. This can be good or bad. Clearly, they are driven people who want to get things done and won’t settle for less. This trait can also lead to stubbornness.

Many INFJ’s struggle to find the right words to convey their (often) complex thoughts. For that reason, they much prefer writing to public speaking or even talking. For that reason, many INFJs are writers or creative types, pursuing avenues that allow them to express themselves.

Being more of a writer type personality instead of a talker may make it harder for people to get to know them personally. Can you relate to this? Do you find yourself preferring to write instead of speaking to communicate?

Are you an Empath?

Often known as “The Advocate”, INFJs are incredibly sensitive to the emotions of others. They will go out of their way to help someone in need and are often drawn to relationships that need help.

INFJ personalities truly feel what others feel. This can lead to being an extremely sensitive person at times. Note that this does not mean they necessarily feel sympathy towards others, it means they get wrapped up in the emotions of others as if they are their own.

There have been reports of even feeling the actual pain of others. Empath can lead to uncertainty and thoughts of not understanding what is going on in your life if you are one.

There is no such thing as a lazy INFJ. They need a purpose in their lives to be happy, which often translates to their high career goals.

Forever driven to succeed, they are rarely satisfied with current achievements. They’re always looking for the next thing to learn, do, or explore.

Many INFJ celebrities are known to possess these traits. The characteristic of being driven and not being lazy has been a compelling reason in their achievement of notoriety. Famous musicians such as The Beatles’ George Harrison, Tailor Swift, and Alice Cooper. Film stars like Sidney Poitier, Mel Gibson, and Carrie Fisher of Star Wars fame. Also Magnum P.I., TV action star Tom Selleck.

INFJs have strong opinions on most things, even if they don’t feel comfortable sharing them. They should never be mistaken for being weak-willed. However, they are also people-pleasers who take criticism to heart, especially when they’ve worked so hard to perfect a project or task.

INFJ people are known to be helpers as well, genuinely trying to assist others to success in life.

So did you figure it out yet? Are you an INFJ? The rarest personality type in the world! Did you know only about 1% of men are INFJ? INFJ women make up about 2% of the population. Are you in that special club?

As you know, every human being is different and while these traits may represent someone’s personality type it is by no means a comprehensive list. People are complex and no single characteristic or list of INFJ traits can truly define who someone is.

Thanks for stopping by. We hope this information proves to be helpful and informative. Maybe you learned something today that will help make your life a happier and healthier one. That is our goal.

Take care and go have some fun! Every day is a precious gift.

Note: Some people think Martin Luther King was an ENFJ personality type but of course, those are opinions. He clearly had many INFJ traits. 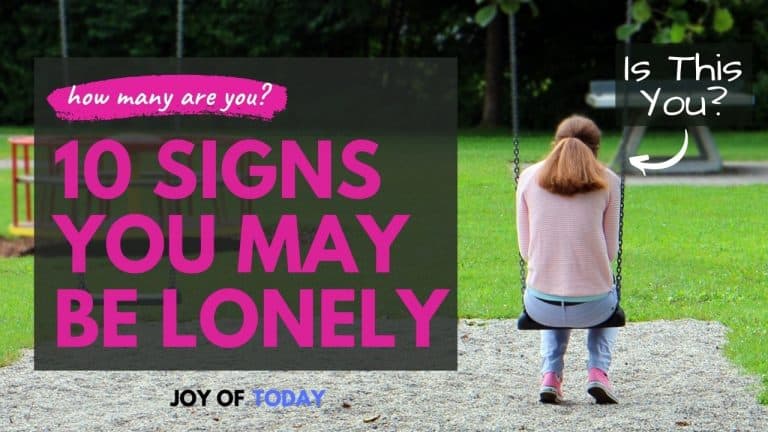 10 Signs You May Be Lonely. How many signs of loneliness do you have? Save this signs you are lonely checklist There are many great books you can read about being lonely. Here are a couple we really like. They are easy to read and provide some simple action items to help improve your life…. 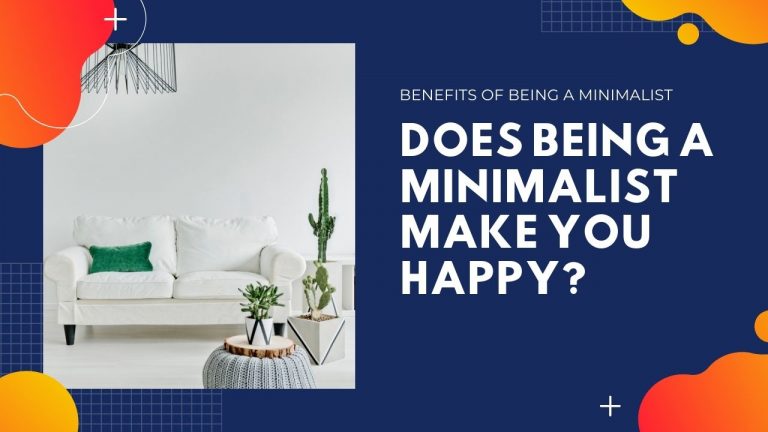 I have often wondered if my life would be happier as a minimalist? Have you ever thought about that? I suppose that is why you are reading this post right now! Do we have too much stuff??? To answer the question for myself, I did some extensive research, spending many hours and days on the…